Ever tried shopping for a gift when they seemingly have everything? Well, that's where Sweet Ride comes to the rescue.

This unique, one of a kind piece allows you to give the best gift you could give someone who has everything. Leave a massive smile on someone's face by personalizing with their name & a product that represents a life they love.

NOTE: Finish on display images are for illustration purposes only and shows a rusted metal finish. Please refer to our color image to see which you would like.

Whether it be your garage, living or lounge room or even your bedroom, this piece will command attention and start a conversation around the very things that make you, you.

Available in your choice of 3 powder coated mild steel finishes of varying sizes, you can truly make this piece uniquely yours. And the best bit... it's 100% Made to Order in the USA!

Purchase your Metal Art today to avoid disappointment as these will sell incredibly quickly.

Whether it’s a gift or for yourself, this is the perfect cross to call yours.

Share
Nancy S.
This came a day early, it shipped really fast. It's great quality and beautiful. this is hanging proudly outside by our shop door. Thank you Sweet Ride!
Debbie E.
Bought this for my husband. He loves it. Too cool...fast turnaround too!! Will order for them in the future!
Michael P.
It will be mounted on the outside of my garage. It looks great. My wife even likes it

It's nice but I thought I got the bigger one. Thought I got 24. The 18 is really small, and even he opened it i felt really bad. The other one i purchased a year ago was perfect so that's what I thought I did again but didnt. 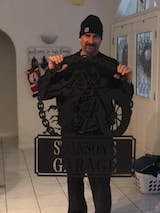 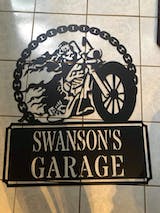 I bought this for a friend who just bought a new house and he is so proud of his double garage to hold his 2 Harleys and all the stuff to go with them. He will love it. Not giving it to him until Christmas, so I don't have a pic. I thought I had to order early to make sure to get it for Christmas. Got it in plenty of time (its only Oct!)! Was super fast delivery!!!

When I ordered it, I forgot the apostrophe in the name and immediately sent a e mail, and they responded right away saying they would have asked before they made it! That is customer service, a lot of companies would have just done it the way you ordered it and blame you for the mistake, this company was not going to let that happen!!

This is the second item I have bought from this company and have been more than pleased with both items!!! You guys do awesome work!!! I'm sure I will buy again!!!

Nice piece of work of art

Got this for my boyfriend and he loves it!!!! This was a perfect gift!

Very happy with every aspect of this order. From initial order to updates on shipping to final product, everything was great! High quality piece and my husband loved it!!! 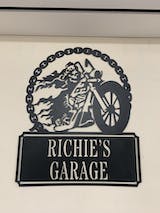 Perfect gift for my husband! He turned the garage into a man cave and motorcycles and the sign is a great addition- he loved it! We just put it up and have already gotten so many compliments.
It shipped fast and I received great service. I recommended your website to all our friends. 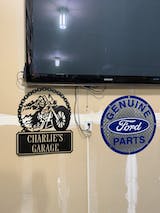